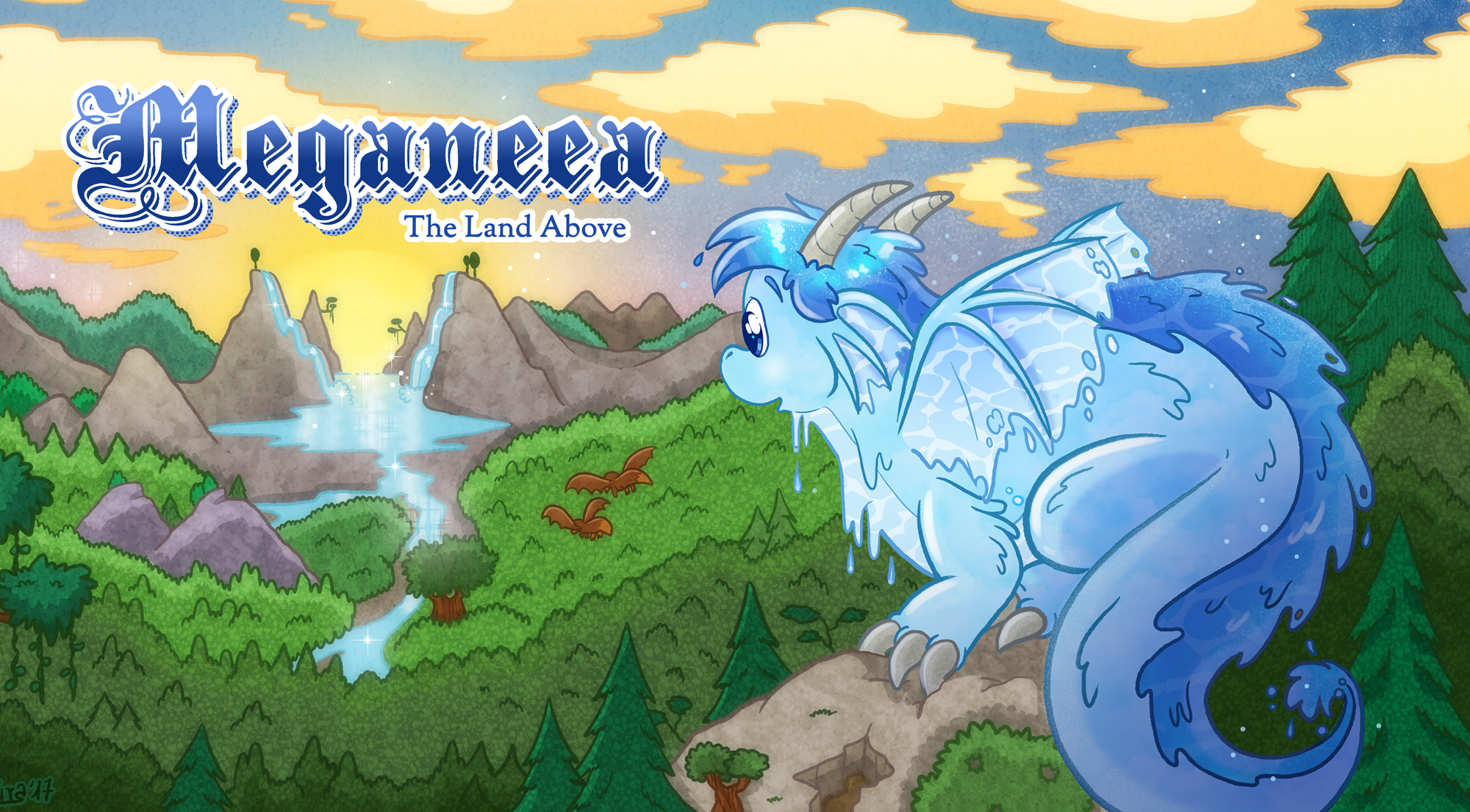 Click on a character’s name to scroll down to their profile.

The creator of all life in Meganeea and mother to Faahvrigüo. She is a dragon with a body constituted of rock and fertile soil, teeming with life from head to tail, and of proportions so vast that without the right angle or distance it is all but impossible to see her as anything other than a mountain range.

The young son of the Earth Dragon. He has little control over the stability of his water-based body, which can cause him to fall apart in a puddle if he trips (although he is able to quickly regain his form.)

​Faahvrigüo cannot yet fly or travel very far; thus, his world is small, and comprised only of his mother.

Uricchin is a sentient little blob of Earth Dragon ear wax —one of a great many that crawl within the grottos that make the Earth Dragon’s deep ear canals. Like all of them, he sports a small flame on his head and a single wick-like hair. The flame dims significantly when he is asleep or afraid.

​Uricchin’s species is affectionately referred to as a “candle-baby” by Meganeeans. It is, however, the oldest species in Meganeea after the Earth Dragon herself.

​Uricchin is very deeply devoted to the Earth Dragon, but most especially to her child. He is young Faahvrigüo’s confidante and his one small window to a world he does not yet fully comprehend.

The only elven survivor of the Calamity that destroyed the Earth Dragon’s original world. Ébano is a wolf-elf, and awakes hopelessly lost within the Earth Dragon’s innards after the destruction, finding himself with only his friend Amadeus and his tar-horse, Charko, for company.

Ébano must not only grapple with the terrible losses that become evident as he gains his bearings, but also with the fact that all of them appear to have lost their mortality —an awful prospect given their circumstances.

​Ébano’s outward appearance is peculiar in that his hair has life of its own. It slithers and curls itself back and forth depending on his mood. His exact age is not known, but he shows the appearance of someone in his mid twenties; however, perhaps as a result of the Calamity, his hair has prematurely grayed somewhat.

A winged rat, and Ébano’s faithful companion. Like his master and friend, he hails from the world before Meganeea, in which the Calamity took place. In contrast to Ébano, Amadeus does not blame the Earth Dragon for their plight, and is certain that there must be a logical explanation for her actions.

Perhaps out of sheer will to be a rock for the both of them, Amadeus has managed to not lose himself to despair in the face of their unwanted immortality.

Charko is Ébano’s tar-horse. Along with Ébano and Amadeus, he made it through the Calamity. While somewhat more intelligent than an average horse, he cannot speak. Charko responds to the winged rat’s command just as faithfully as he would Ébano’s.

​His body constantly drips tar, but the drops of tar follow him and melt back into him as he walks. He does not need food or water to stay alive. The nature of his soul or whether he has one is not understood, but Charko is not a creation of the Earth Dragon, and is not “alive” in the usual sense of the word.

​He is able to cool and harden certain portions of his body at will, making it safe for his master to ride him without a saddle.